The Art of Peter Flinsch 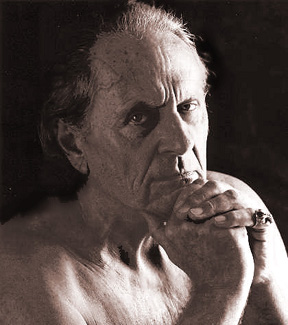 Peter Flinsch, 1994. Photo: Carlos Quiroz, Montreal
Courtesy Leslie-Lohman Gay Art Foundation
"I try to communicate the beauty of the body, of the male body, of the human body, and in a very positive sense. I'm not trying to take the body apart - I see it as a whole. I'm optimistic about the body. I say yes to the body - I don't deny it. I never have."

So comments gay Canadian artist Peter Flinsch when contacted about the forty-year retrospective of his work sponsored by the Leslie-Lohman Gay Art Foundation (LLGAF) in New York City's Soho district September 13-October 15. Titled "Montreal's Peter Flinsch: Paintings and Drawings, 1954-1994." the show amply demonstrates his passion for the body in its oil portraits, its exquisite drawings of male nudes, and even its lushly colored landscapes. Adds Flinsch: "One of my favorite artists is the English Romantic William Blake, who said that in every landscape he found a part of the human being. I subscribe to that view exactly."

A good deal of the power in his work comes from his mastery of the line. Comments LLGAF cofounder Charles Leslie: "Peter has an amazing, an almost miraculous ability to lay down a line in wet ink and have it perfect the first time - no question of erasures or changes. It's a skill that transcends technique; it's pure, raw talent, and helps make his work surpassingly impressive." Nevertheless, a great deal of practice has gone into developing that skill. "Drawing is a very large part of my art," says Flinsch. "So is the line. I draw every day, and I've worked at perfecting the line."

At age 74, Flinsch has spent a great number of days drawing lines. And to meet him in person is to encounter a physical presence that remains commanding despite his years: tall, "larger than life," in the words of Charles Leslie, his great size accompanied by an expressive voice and gestures.

It is also a voice that speaks with a German accent, for although Flinsch is now a Canadian citizen, he was born in 1920 into a well-to-do upper-bourgeois family whose home was Leipzig, Germany. Educated at liberal, private boarding schools, he served during World War II in the German air force. It was not a happy experience. In 1942 he was accused of homosexual behavior by a sergeant who disliked him. "I hadn't done what I was accused of," Flinsch says, "but I knew I was gay and admitted I had gay feelings during my court-martial. It was quite enough for the military court to find me guilty."

Being in the air force, Flinsch was not placed in a concentration camp but instead assigned to a military punishment unit that carried out duties such as minesweeping. The work was dangerous, the odds of survival not good. "What saved me." he notes ironically, "was malaria. I got it in North Africa, maybe Italy, the kind that doesn't necessarily kill you right off but comes back regularly, every three months." So every three months he had to be hospitalized, which kept him off the battlefield for weeks at a time.

War's end found him back in Leipzig, recuperating from a wound he sustained in February 1945. "Germany was in shambles," says Flinsch. "I had no money, my family had no money. I was well enough to work, and needed a job. " He found one as a scene painter and carpenter in the local civic theater, reopened shortly after the war to serve as a means of cultural reeducation for the German people after twelve years under Nazi rule.

"Leipzig was in the Russian zone of occupation," Flinsch explains. "So as you may guess, I soon ended up doing 'people's art'. I got a good technical art education, but I still have nightmares about painting another 30 foot-high mural of Karl Marx." Deciding people's art was not for him, he moved to the Western sector of Berlin, where he met Heino Heiden, a dancer and choreographer, who was to be his lover for ten years. In 1952 the two men moved to Paris, and in 1953 to Vancouver, where they had German-Jewish friends who had already immigrated. Liking Canada immensely, he became a citizen, and moved to Montreal in 1955. From then until his retirement in 1985 he served as an art director with the television services section of the Canadian Broadcasting Corporation (CBC).

His work for CBC not only gave him great professional satisfaction, but economic security, allowing him the freedom to develop his own art as he wished: "I never had to ask if I dared expose my art or if it would sell. I could experiment and do anything I liked - which of course is beneficial for any artist." He adds: "Over the course of forty years an artist changes and develops. It's always my hand, but themes change. I've also traveled a lot. There are pieces inspired by things I've seen in Morocco, Zimbabwe, the West Indies."

Flinsch is represented in public and private collections in Canada, the United States, Britain, Germany, Italy, and France. Besides LLGAF he has had solo shows at galleries in Montreal, Toronto, and Oshawa in Canada; Amsterdam; and Berlin, Düsseldorf, Hamburg, Lübeck, and Hagen in Germany. Galeries Janssen in Berlin is planning a show in honor of his seventy-fifth birthday next year, to be accompanied by a monograph on his drawings.

Asked for a concluding remark, Flinsch states: "You can say I'm optimistic. If you ask me about my experiences being gay I'm a very great optimist. If anyone had told me in 1943, when I was down and out, that fifty years later I would see what I see today, and be able to talk about it like I'm talking to you, I would have ... I mean, you know, it's a miracle. I never would have believed it. Even with the antigay backlash that happens sometimes now, I'm an optimist - very positive."